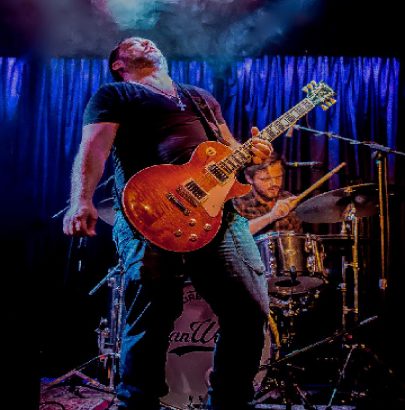 A young Sean Webster’s life dramatically changed when a friend introduced him to the likes of the music by the
blues greats. The three Kings, Albert, BB, and Freddy, as well Robert Cray, Buddy Guy, Gary Moore and the
primary reason for Sean playing the guitar, the legendary Eric Clapton. Sean’s passion for guitar and his
dedication to music since has continued to grow to an almost fevered obsession. That thirst for music has led to
the creation of six studio albums and taken Webster on a touring life across America and Europe taking in many
of the Blues-Rock scenes leading venues and festivals.
Webster’s instantly recognisable voice coupled with his heartfelt melodic guitar playing has become the feature
on all his album releases. Both Webster’s blues-inflected guitar licks and weathered soul shouter vocals are
always passionately sung across tightly arranged songs. Music News had this to say about Webster’s talents.
“I haven’t heard anyone with a voice like Sean Webster’s a wonder that he isn’t being hailed as a Blues
superstar”
RIVERSIDE STAGE